In my previous blog it has been shown that the combination and disposal of pairs of colorful marbles with two condition can prove any valid syllogism tabulated by Leibniz by the lineal combinatoric of Ploucquet. The combinatoric verification process can be simulated by the game of arranging and disposing colored marbles with pieces of paper..

In the following it will be shown that we can also make the game arranging and disposing colorful cards with only two orientation. The secret is the fact that we can replace the changing the marble positions to represent the opposite concept in the last game with the changing of the card orientation in the new game.

, the its opposite NOT a is represented by the horizontally oriented card .

If the subject is represented by a red card

and predicate b represented by green card

, then the fundamental categorical statement of Aristotle is represented by pairs of different oriented cards as it is shown in the following table 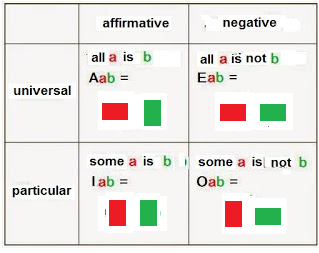 The premises and conclusion of a syllogism form is one of four such statements.

Proof of the Validity of Syllogism

With a game like this, we can do the proving of valid syllogisms with ease, because the end result of the game is a representation of the syllogism by disposing pair(s) of opposite orientation of similar colored cards in the Leibniz’s table below: 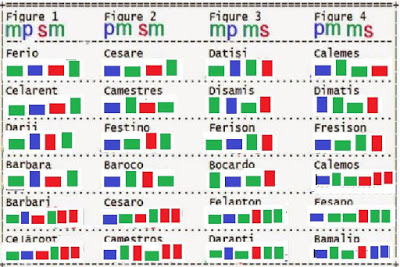 Posted by armahzar on September 7, 2015 in Uncategorized